The Florida Keys are home to one of the premier tarpon fishing destinations on the planet!  Every spring, thousands of tarpon migrate through our waters from both the Atlantic and Gulf sides, offering some of the best opportunities you’ll find for catching tarpon on bait, fly, or artificial.  What’s also unique about the Keys is we have tarpon that live here year round, unlike many other areas of the U.S.  Sometimes the ‘off season’ is even better fishing than in prime time as these tarpon aren’t seeing near the pressure that they do in the spring time.  Generally speaking, your best tarpon fishing months are April through July.  Though we usually start catching some in February whenever the water temperatures consistently get in the mid 70 degree range.  Some years it stays like that and we have a good early spring for them, other years we are bombarded with late cold fronts and the tarpon fishing doesn’t get consistent until a little later.  One things for sure though – if the weather is calm and warm, you should have a very good chance at catching tarpon in Islamorada.  April and May are traditionally thought of as the peak months of tarpon season and this is definitely true – you probably have more tarpon here at these times than any other, as there are a large number of migrating fish here then plus many of the residents.  Though you must remember, just about every guide is fishing at these times too (many during the day, and many at night) so the fish have a ton of pressure on them during these months.  With all that pressure the fish definitely get smart after a while, so while you may see lots of fish on any given day, you may find that there are times when they just don’t want to bite!  The summer time offers great fishing for more of our resident tarpon.  Usually some time in June the spawning business seems to be over and many of the larger fish start to work there way north.  This means you have many of the resident tarpon, often the smaller males in the 20 to 60 lb range, coming back to their usual haunts and they often are hungry!  Often your conditions are ideal as the windy spring season is over, so you get a lot more calm, warm days that these fish love.  There are also a lot less boats fishing for them and many of the ‘out of town’ guides have left for the summer.  So all of a sudden the tarpon seem to get much easier to catch, even though you may not see the big numbers of them that we did earlier in the year.  Often times even in the Fall we get good fishing for tarpon.  September and October can sometimes provide a ‘fall bait run’ similar to the spring mullet run that we get, though it is not as consistent as the spring bait migration as to how much bait and where exactly it occurs.  But some years we have some of the best fishing we ever see during this time, and there usually is hardly anyone else out there to compete with so it can be a great time to come.

Capt. Rick Stanczyk is one of our premier tarpon specialists, read his Islamorada Tarpon Fishing Blog or follow him on Facebook. Updated every day that he targets tarpon! 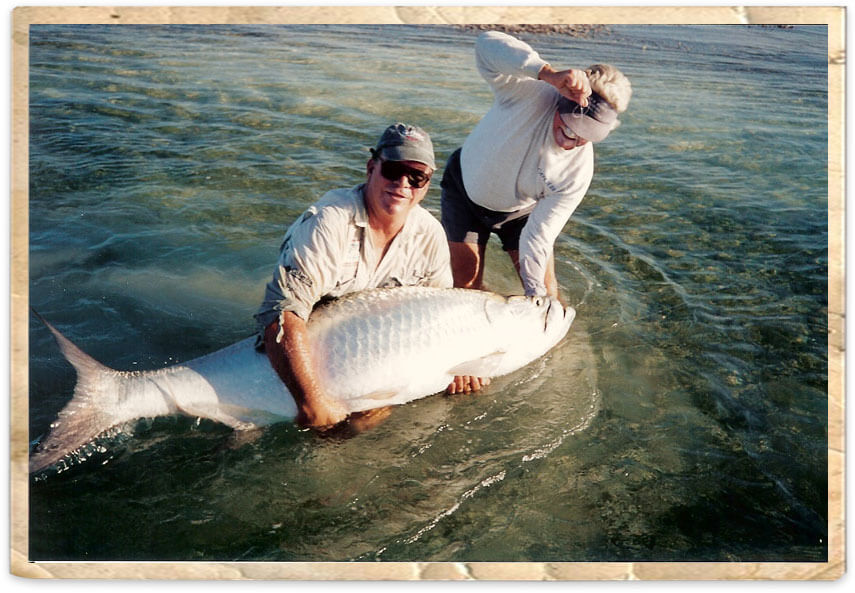 Most of our guides prefer to live bait fish with crabs and mullet, which is the thrill of a lifetime. They may fish dead baits at times too when the tarpon are not feeding on live ones, which can often be the case depending on conditions/time of day. Often bait is caught before or during the trip with a cast net, or sometimes even on rod and reel and saved for later. In April and May mullet are usually available for purchase which is how many guides obtain them. Crabs are usually available most of the time too for islamorada tarpon fishing.

The local bridges and channels near Bud N’ Mary’s are usually very productive on half day trips for Islamorada Tarpon Fishing . On full days we often fish them in the everglades while fishing for other species too! Our guides often fish the early mornings or later evenings in season as that provides the best chance for a bite depending on what the tide is doing. So if your looking for the ‘fish of a lifetime,’ such as a Tarpon in the Keys, you are in the right place!

We feel the entire experience and area we go to fish is as much as part of the excitement as catching a tarpon, so we do not fish the tarpon in our marina basin! These are like trained pets, so while it may appear they are all over the place as you see them in many marina basins and canals, it is often a different story when your out looking for them in the wild.

Unfortunately, we do not bring tarpon into the boat for taking pictures. It is now against the law as tarpon are deemed a ‘sportfish’ and special rules in Florida apply. The reason for this is lifting these fish up by the head and gills is unsafe for the fish as they are not designed to support weight in this way. They also can become uncontrollable at times and thrash around in the boat, breaking things and injuring themselves and possibly those in the boat as well. If you desire a picture, it is usually possible to get a ‘leader shot’ of you holding the fish alongside the boat, or in certain cases it may even be possible to jump in and hold the fish too! Due to lessening the mortality rates of these fish, we suggest only wearing one fish down to the point of being able to get a picture and cutting the rest off once the leader is grabbed and they are considered caught.

Mounting a tarpon is a great option for those wanting to remember a ‘fish of a lifetime.’ Nowadays it does not require killing of the fish to do so, only a estimate of the fishes size and weight needs to be obtained. We use Gray Taxidermy to produce high quality, life-like mounts of all fish and they truly do an incredible job. They are all hand painted and molded out of fiberglass so they can last a lifetime. Mounts can be completed and shipped often within 3 months. Check with your captain for details! 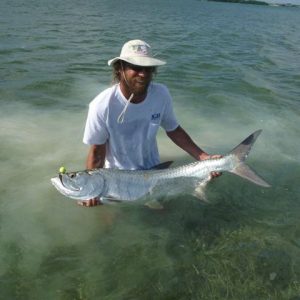 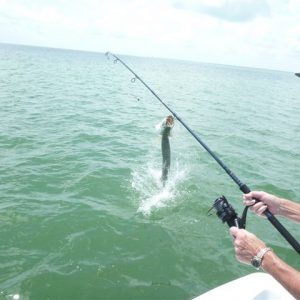 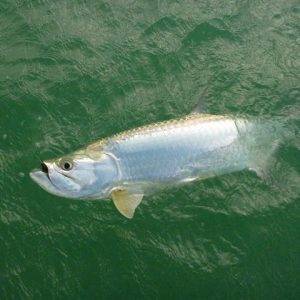 Bring your own drinks and snack, none of it its provided for you. You will have great fun and you will go home with a bucket or cooler of fish. They provided an array of bait and they will help you every step of the way. The bait doesn't promise that you will catch fish but at least they will die trying for you. Great experience, gorgeous day to be out, turquoise waters and alligator reef beautiful as always. Nice boat, stable and smooth ride to the reef and back. read less