Summer time is here and it’s been a hot one early on!  This hasn’t hurt the fishing much though – we’ve had tremendous fishing in the backcountry and inshore waters of the Florida Keys and Islamorada.  Tarpon fishing has been fair during the day time, often being best early in the morning or later in the late afternoon/evening with the heat of summer.  It’s been a little more hit and miss lately though we had a tremendous season overall with very good fishing from February through most of May.  But the great thing about fishing in Islamorada is there are plenty of other options if one thing doesn’t work out.  Many guides opt to fish in the everglades national park where you are never far from being able to go catch things like redfish, snook, trout, snapper, tripletail, sharks, and more.  The fishing back there has been the best it’s been in a long time.  We’re still seeing numbers of redfish and snook that are almost unheard of.  Tripletail fishing has been good in the Florida Bay.  With the commercial trapping season closed out in the gulf, these fish are more often found drifting in the bays and channels in the backcountry, where you can just idle around in the boat and look for them.  It’s a little easier version of sight fishing, and they are great eating too!  Often many larger ones are caught this time of year.  The summer time tarpon fishing in the everglades is also going to get better and better.  July, August, and even September can be peak months for that.  It’s hot, but with the consistently calm conditions and much less fishing pressure, the fish get in much more predictable patterns and we have some of the best fishing for tarpon that we get all year.  Not the big monsters that we get in the spring time, but many 20 to 60 lb fish.  For family fun or those after some tablefare, fishing in bay for snapper and trout is also very good throughout the summer and can be a good half day option for those worried about being in the hot sun all day.    Permit fishing in the gulf can also be good through the summer.  It’s not always a guaranteed thing – you have to be willing to ride and look, and have patience sitting on spots for fish that may or may not show up – but they are definitely back there.  Give us a call and let’s plan your next fishing adventure!  305-664-2461

Capt. Perry Scuderi has still been catching some local Islamorada Tarpon around the bridges, as well as getting into some good tripletail action in the backcountry.  Capt. Mike Bassett has put together some nice mixed bag trips with redfish, snook, and tripletail lately.  Capt. Bill Bassett had anglers using both fly and spin, catching redfish and snook in the backcountry and even some juvenile tarpon one day on fly.  Capt. Mike Venezia had a few tarpon as well as monster goliath grouper recently.  Capt. Jim Willcox and Capt. John Johansen with some various sharks including hammerheads, cobia, and big sawfish.  Capt. Ted Wilson with some redfish and tripletail on fly recently too. 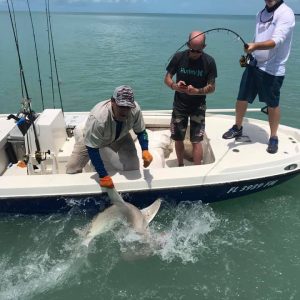 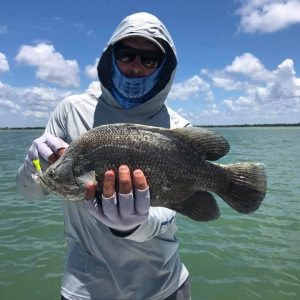 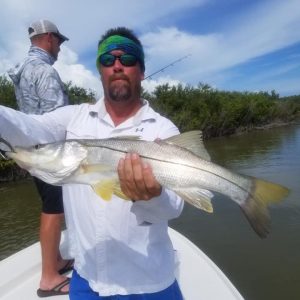 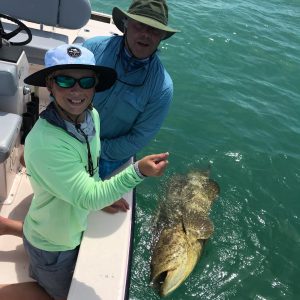 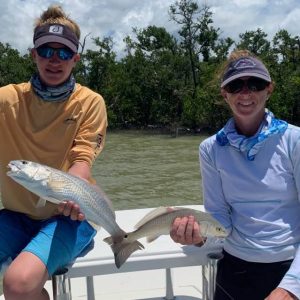 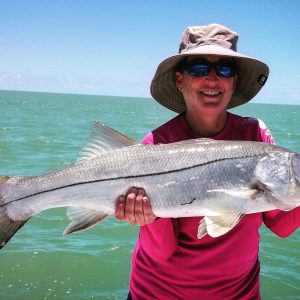 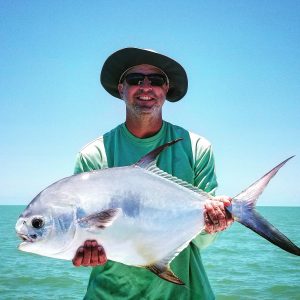 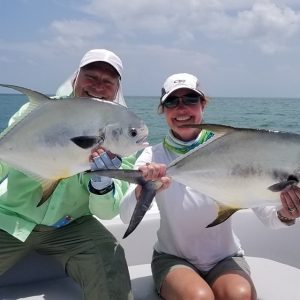 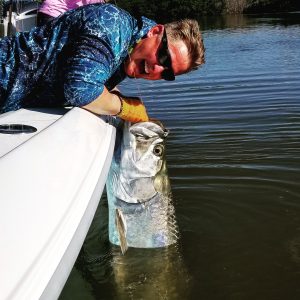 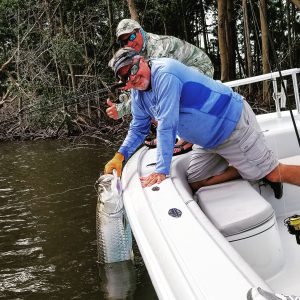